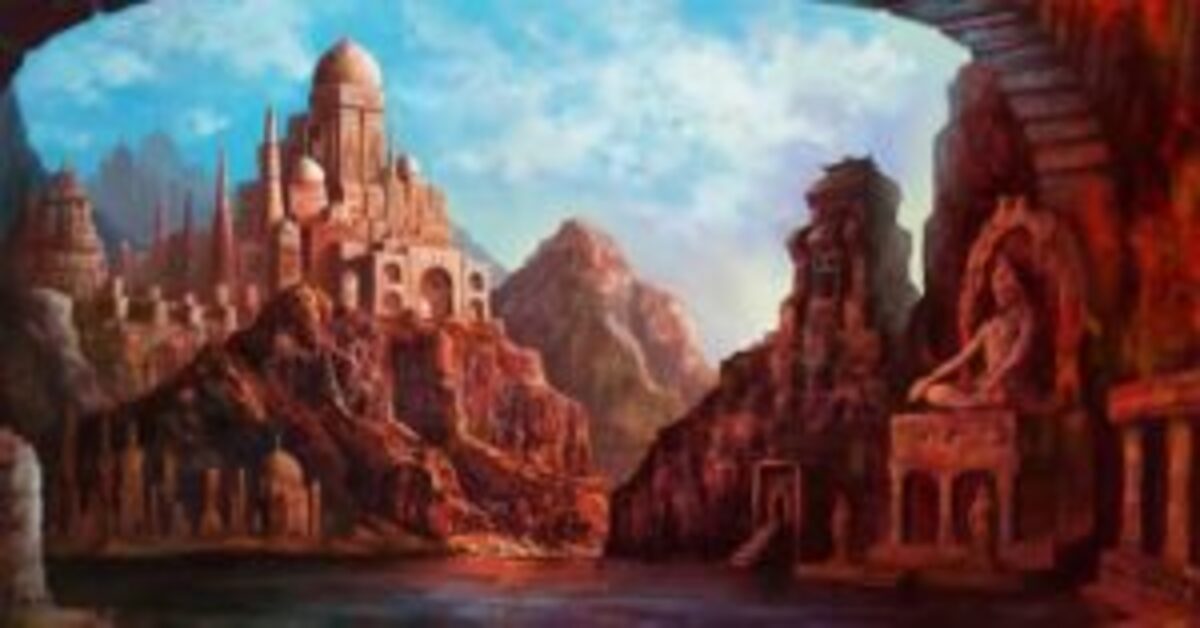 In this article, I’ll be sharing the Story of Mahabharata with Pictures. this article is not short but still it provides you the best knowledge which everyone should know about the Mahabharata. 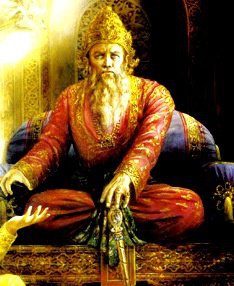 There was a king named Shantanu, and his wife’s name was Ganga. Devavrata was the name of their son. He grew into a good prince. Shantanu fell in love with Satyavati one day. Shantanu inquired of Satyavati’s father about his ability to marry her. He agrees, but on one condition: the throne should not be passed down to Devavrata’s children, but to Satyavati’s.

Story of Mahabharata with Pictures- Shantanu, on the other hand, was not pleased and declined. When Devavrata learns of this, he goes to Satyavati and vows to remain celibate for the rest of his life and to remain bound to the throne.

Devavrata became known as Bhishma, one of the most wise and powerful characters in the Mahabharata, as a result of the vow he took. Satyavati and Shantanu marry and have two children, Chitrangada and Vichitravirya. Chitrangada is supposed to be the heir to the throne, but he is killed in the battle with the Gandharvas.

Then Vichitravirya ascends to the throne and marries Ambika and Ambalika. But Vichitravirya died before they could have children. Satyavati also had a son named Sage Vyasa (he is also author of the Mahabharata). She begs him to grant both women children through the niyoga tradition.

Ambika and Ambalika then gave birth to two sons. Dhritarashtra and Pandu were their names. Dhritarashtra should have been king after his father died, but he was barred from the throne because he was blind. Pandu, his younger son, was crowned king. Pandu ruled his kingdom well for a while. His joy, however, was fleeting.

Story of Mahabharata with Pictures- He was hunting one day when he killed a deer. He realises the deer is in fact a sage. The sage then curses him with the inability to reproduce and thus produce an heir. Outraged, he handed over the empire to Dhritarashtra and retired to the forest with his two wives, Kunti and Madri.

Dhritarashtra was relieved that there would be no one to claim the throne (Pandu cannot have children), and that the next throne would be solely inherited by his sons. But there was a catch: Kunti had a boon from sage Durvasa that allowed her to have a child by any god she admired without having a marital affair. She needed to chant a mantra with great devotion to a god of her choice, and that god would come down to Earth and give her a child. 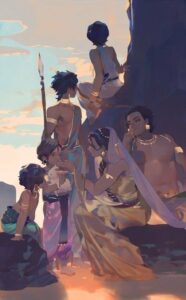 Kunti, while in the forest, chanted the mantra to three gods: Yama, Vayu, and Indra, and bore three sons: Yuddhistira, Bhima, and Arjuna. She also taught this to Madri, who chanted mantras to the Ashwini twin gods and had two sons, Nakula and Sahadeva. These five sons are referred to as Pandavas. Another important story to remember is that when Kunti first received this mantra, she dedicated it to Surya, the sun god, to see if it worked. It was the mother of a boy. This young man is Karna, a pivotal figure in the Mahabharata.

However, she was unmarried at the time. As a result, Kunti abandoned the newly born Karna adrift in a basket on the Ganges, hoping he would find foster parents. The basket is discovered, and Karna is adopted and raised by foster Suta parents Radha and Adhiratha Nandana, who work as charioteers and poets.

But, sadly, Pandu died one day. Madri, heartbroken, threw herself into his funeral pyre and died, leaving Kunti to care for all five boys alone. She chooses to return to Hastinapura. During this time, a lot of things had happened in Hastinapura. Dhritarashtra and his wife Gandhari have 100 children and a daughter. They were all born almost at the same time, and not in a natural way.

Story of Mahabharata with Pictures- Vyasa once granted Gandhari a boon in exchange for a hundred sons. She became pregnant and gave birth to flesh, which Vyasa cut into one hundred and one pieces and incubated in a mud pot. Now, let’s get back to the story. Kunti had arrived at Dhritarashtra’s residence. He allowed them to remain inside.

The 105 princes were raised together. They were instructed by Drona. Karna, as I previously stated, was also educated here. The Pandavas outran everyone in all lessons and departments. Yuddhistira (Dharmaraj) was the most honest and upright, Bhima was the strongest, Arjuna was the best archer, and Nakula and Sahadeva were the best horsemen.

The Kauravas, particularly Duryodhana, were envious. He and Shakuni and Karna once decide to poison Bhima. However, Bhima survives. Then, after all of the princes’ education, there was an event. Yuddhistira was crowned king as a result of this. This was against Duryodhana and Shakuni’s wishes. So, once again, they devise a plan to assassinate the Pandavas. They erected an inflammable palace and invited the Pandavas to spend the night there. 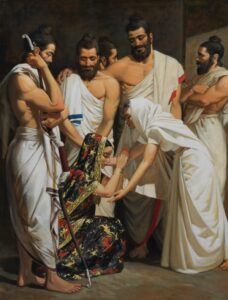 Vidura, Hastinapura’s prime minister, warns the Pandavas about this plan. That night, before the house was set on fire, the Pandavas fled. This was the point at which they realised Duryodhana’s hatred for them. Pandavas went into hiding. They learned of Draupadi’s swayamwara one day. The person in her swayamwara had to shoot a bird by looking at its reflection. Everyone was a failure. Then Arjuna, who was disguised, shot the target precisely. Draupadi then marries Arjuna.

This is the first appearance of Krishna in the Mahabharata. Then he meets Arjuna and becomes friends with him. Arjuna had no idea that the man he was friends with was the parabrahman himself. Arjuna returns Draupadi to her home after the event. “Look what I brought home, Mom!” he exclaims. Kunti misinterprets Arjuna’s fruit and says, “Whatever you brought, share it among yourselves.”

There was no turning back now that Mum had spoken. Draupadi then married all of the Pandavas. Duryodhana realises that the person who shot the target at Draupadi’s swayamwara was Arjuna, because only he could shoot with such precision. Dhritarashtra is then made aware of this. He gifted them with some land. The land was desolate and desolate.

However, the Pandavas transform this desolate land into a beautiful kingdom. This kingdom is known as Indraprastha. This kingdom was a lovely paradise that thrived under their rule. Duryodhana becomes extremely envious after witnessing their prosperity. He devises yet another devious plan. He decides to take advantage of Yuddhistira’s weakness and flaw – gambling and Pachisi, the dice game.

He invites Yuddhistira to join him in the game. Duryodhana requests that Shakuni play on his behalf. The dice game is purely a game of chance and luck. There is no way to guarantee victory. Shakuni was a cheating master in this game. Yuddhistira kept losing and Shakuni kept winning throughout the game. But Yuddhistira kept playing, convinced that luck would soon turn his way (he had no idea the game was rigged). 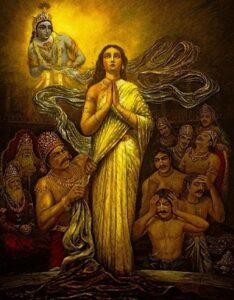 Each round of the game, both sides had something important at stake – palaces, territories, and so on. Yuddhistira was robbed of everything. He then bet his four brothers, Draupadi, and himself. He’d lost it all. His entire kingdom, his family, himself, and his adoring wife. The Kauravas then dragged Draupadi into the centre of the assembly. Karna orders Dushasana to disrobe Draupadi in front of everyone in the midst of the assembly.

Draupadi makes a prayer to Krishna. Krishna then makes Draupadi’s saree infinitely long, saving her. Dhritarashtra then intervenes and demands that the Pandavas return everything. After all of this, Krishna promises Draupadi that he will punish them all for insulting her in this manner. They invited Yuddhistira again after a few months. This time, the loser would have to go into exile for 12 years, followed by a year of incognito spending.

If they are apprehended during this time, they should be exiled once more. Yuddhistira played once more and lost. He, his wife, and all of his brothers leave for exile. During this time, Arjuna travels to the heavens to train for battle. The Pandavas then successfully spend their final year incognito in the Virata kingdom. 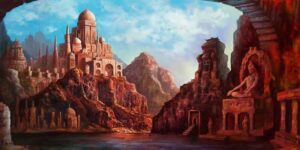 Yuddhishthira became a king’s counsellor, Bheem worked in the royal kitchens, Arjuna transformed himself into a eunuch and taught the palace maidens how to sing and dance, Nakula and Sahadeva worked at the royal stables, and Draupadi became the queen’s handmaiden. They were not apprehended. They went back to Duryodhana to reclaim their land. Duryodhana, on the other hand, refused to relinquish the throne.

Yuddhistira requested only 5 villages, but Duryodhana refused, stating that he would not give land small enough to fit on the tip of a needle. Krishna attempted and failed to complete a peace mission. As a result, there was only one option left: declare war. Preparations began on both sides. The Kauravas gathered a large number of rulers from all over the subcontinent. 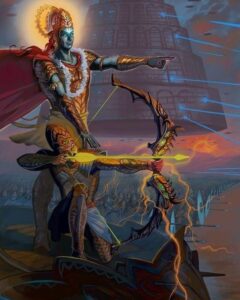 Arjuna asks Krishna to drive him through the battlefield about an hour before the battle. Then Arjuna noticed that the people on the opposing side were none other than his own relatives, his uncles, cousins, and everyone else. He becomes depressed. He informs Krishna that he does not wish to fight. This is when Krishna tells Arjuna to fight and explains why. This is when Krishna reveals the wisdom of the Bhagavad Gita to Arjuna.

Arjuna decides to fight after listening to Krishna and takes up his bow. The war is fiercely fought by people on both sides. Pandavas, despite having a much smaller army than the Kauravas, fight valiantly. The war lasted 18 days. Throughout the journey, Krishna guided Arjuna. Both sides’ mighty warriors were slaughtered. Bhishma was defeated after ten days of fighting. Drona was then killed 5 days later. Karna was killed two days later. Duryodhana was killed on the final day, and the war came to an end.

Yuddhistira was crowned king of Hastinapur and Indraprastha after the war. The Pandavas reigned for 36 years before abdicating in favour of Abhimanyu’s son, Parikshit. The Pandavas and Draupadi set out on foot for the Himalayas, intending to spend their final days ascending the heavenly slopes. They died one by one on this final journey, and their spirits ascended to the heavens. Only Yuddhishtra does not fall, but rather enters heaven and then departs from his life. 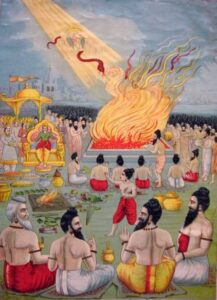 Draupadi, Pandavas, and Dharmaraj Yuddhistira all ascended to the heavens together, but Krishna’s journey ended tragically. He and his clan were cursed by Kauravas Gandhari’s mother to fight among themselves and die. She did this in the aftermath of her children’s deaths. Krishna’s clan, the Yadava, was annihilated. He then goes to a forest and lies down under a tree one day. A hunter misidentifies him as a deer and fires an arrow at his foot.

The hunter begs forgiveness. Krishna forgives him and departs from the physical body. Yuddhistira abdicated the throne after Krishna’s departure. This story was told to Lord Ganesha by Vyasa (who I mentioned earlier). Parikshit, Yuddhistira’s son, succeeds him as ruler. He dies as a result of a naga bite from Takshasa. Janmejaya, Parikshit’s son, then decides to start a snake sacrifice, Sarpa Satra.

Vaisampayana, Vyasa’s disciple, reads the epic to Janmejaya just before the sacrifice. This entire story became known as the Mahabharata.